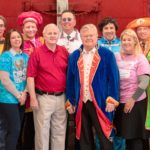 Circus World is turning its annual Big Top Parade into a groovy, 1960s-style shindig.
Antique circus wagons, big top performers and marching bands will take to the streets of downtown Baraboo on July 20. Inspired by Circus World’s “Summer of Luv Under the Big Top” theme for 2019, honoring the institution’s 60th anniversary, the Big Top Parade and Celebration will be a real gas, celebrating the ‘60s in marvy fashion.
The parade will step off at 11 a.m., led by Grand Marshal Gene Allen Scott. No stranger to the ‘60s, Scott got his start as a DJ in that decade, and his weekly oldies show on 99.7 MAX FM attracts listeners who came of age during the Summer of Love.
“The Baraboo Big Top Parade committee loves to shine the spotlight on people who have contributed to our community, and Mr. Scott has been bringing music and entertainment to the people of south-central Wisconsin for more than 50 years,” said Dave SaLoutos, Circus World’s performance director.
Before and after the parade, a Circus Celebration designed for kids of all ages will delight the 30,000 spectators who descend on Baraboo each year. Scott will host a mini-music festival and dance dubbed “Boo-Stock,” will pay tribute to the famous Woodstock music festival of 1969. “I especially enjoy the opportunity to perform live,” he said. “I lived and worked the music scene in the ‘60s and ‘70s and have a real feeling for the music of this era.”
This year’s event is sponsored by Baraboo State Bank, which has been a business partner of local circus enterprises since it helped the Ringling brothers get started with their first loan in 1876.
“Baraboo’s 147 years of circus heritage is only possible because of 162 dedicated years of Baraboo State Bank’s devotion to Baraboo and its circus heritage,” said Circus World Museum Director Scott O’Donnell. “There’s probably no other fiscal or financial institution in the country, and maybe the entire world, that has ever used an elephant as collateral.”
Was the bank delighted to continue its legacy of promoting the circus and preserving the traditions of this time-tested art form? You bet your sweet bippy!
“It’s a commitment to our community, and especially the children,” Baraboo State Bank Chairman Merlin Zitzner said. “They are the future, and it gives them a chance to enjoy animals, wagons, cotton candy and all of the good things that come with Baraboo’s Big Top Parade.”
When the bank agreed to sponsor the parade for a third consecutive year, the Baraboo Area Chamber of Commerce – which partners with Circus World in presenting the parade – said, “Right on!”
“We’re overjoyed that Baraboo State Bank is leading the way as Presenting Sponsor,” said Nanci Caflisch, parade co-chair and past president of the Chamber of Commerce. “Their tremendous support ensures we can bring together an incredibly imaginative and inspired event that folks truly love, and brings happiness to so many!”
It’s a day of fun certain to sock it to ya! Visit the event website at http://bigtopparade.com/